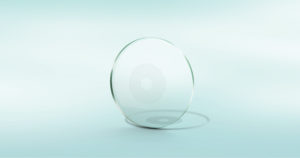 The Hoya MiyoSmart spectacle lens with DIMS technology is designed to control myopia in children, based on the principle of myopic defocus and simultaneous vision. It is a dual-focus spectacle lens consisting of a 9 mm central optical zone for correcting distance refractive error and about 400 tiny circular segments with a relative positive power of 3.50D equally distributed throughout the mid-peripheral area in a honeycomb pattern.

The newly published study aims to determine (1) if myopia retardation, as measured by changes in spherical equivalent refraction (SER) and axial length (AL), continues in the third year of DIMS spectacle lens wear and (2) if myopia retardation is exhibited in the first year of DIMS wear by the original SV control group. Both groups were compared with a new historical control group. Ethnic Chinese children who had completed the two-year RCT were invited to participate in the third-year follow-up study.

Myopia progression and axial elongation were less in the subjects wearing DIMS lenses throughout the three years, first compared with the initial control group (which subsequently became the Control-to-DIMS group), and then in the last 12 months compared with the historical control group. In the DIMS group, myopia progression and axial elongation in the third year were similar to those in the first and second years.

The Control-to-DIMS group subjects showed significant reductions in myopia progression and axial elongation after switching from SV to DIMS lens wear. Their SER and AL changes in the third year were comparable to the first-year changes in the DIMS group, even though these subjects were two years older. In comparison to the historical control group, their myopia progression and axial elongation in the third year, after adjustment, were reduced by 86% and 61%, respectively.

Conclusions: Myopia control effect was sustained in the third year in children who had used the DIMS spectacles in the previous 2 years and was also shown in the children switching from SV to DIMS lenses.