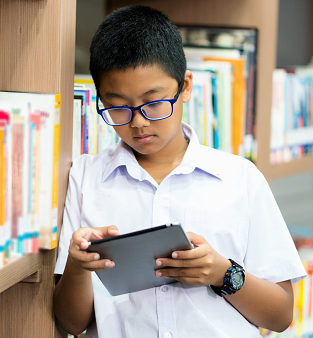 Myopia has become a critical public health issue, particularly in Asian countries, with a projected prevalence of 49.8% by 2050, with an increasingly younger age of onset. Recent studies have investigated the impact of near work, including electronic devices upon childhood myopia. However, these studies failed to distinguish between the different types of electronic devices. Thus, the relationship remains unclear. In this article, the association between smartphones, computers, tablets, and television screens upon myopia was examined using a cross-sectional study. A total of 566 students aged 6-14 years, from Tianjin, China, were subjected to comprehensive eye examinations, including ocular biometry. A questionnaire addressing demography, reading and writing, and electronic device usage (smartphones, tablets, computers, and television) was administered to parents by research assistants. Data on electronic device usage, reading, and writing was gathered as hours per day during weekdays and weekends and summarized.

In this study, the absence of a longitudinal study design restricted the data collection to a single event. Therefore, losing the opportunity to analyze electronic device use and its impact on myopia over time. Additionally, the prevalence of myopia was 59.2% in the target population, with 40.9% of participants having at least one parent with myopia. Thus, potentially leading to biased findings due to a greater number of myopia associated participants. The completion of the questionnaires in this study by parents rather than participants also created an opportunity for recall bias.

Aside from the limitations of this study, it highlighted the impact of time spent on electronic devices SER and AL in Chinese children. It is hoped that future longitudinal studies investigating the characteristics of electronic devices will advance our knowledge of childhood myopia and the factors that affect it.

METHODS
A school-based, cross-sectional study was performed on 566 children (302 boys and 264 girls). The children underwent a comprehensive eye examination, including cycloplegic autorefraction and ocular biometry. The children’s parents completed a detailed questionnaire that included each child’s demographics, the use of electronic devices, and other related risk factors.

CONCLUSIONS
On average, a more myopic SER and longer AL were both associated with more time spent using smartphones and computers, but not with time spent using tablets and watching television. The magnitude of the association between SER and time spent reading and writing was substantially larger than that for smartphone or computer use. Different types of electronic devices had differing levels of association with myopic refraction.