Myopia is often considered by parents and patients to be a relatively benign condition that is easily corrected with spectacles, contact lenses or refractive surgery. For most, excessive axial length, paired with the power of the anterior segment refractive components of the eye (i.e., the cornea and crystalline lens) is the cause of their nearsightedness. For clinicians, this means that the care of these patients includes not only management of their vision correction but also appropriate management of retinal pathology associated with excessive axial length. This is especially true for patients who are considered high myopes. The International Myopia Institute defines high myopia as spherical equivalent refractive error equal to or worse than -6.00 diopters.

The prevalence of myopia is increasing worldwide, and the term myopia epidemic is being used more and more frequently within the profession. This myopia epidemic will have a profound impact on optometric practice, as it is estimated that there will be 5 billion myopes worldwide by 2050, with almost 1 billion of these patients being highly myopic ( ≤–6.00D).1, 2 Given the sheer number of myopic patients we will be treating, optometrists should anticipate an increase in retinal pathology in their patient base, with the potential for significant visual impairment. Among the conditions optometrists will manage with increased regularity are retinal detachment, open-angle glaucoma, cyrstalline lens changes, and myopic maculopathy.

Odds Ratio of Ocular Disease as a Function of Myopia1

Given these changes in the peripheral retina, it is well established that increasing myopia increases the risk for retinal detachment. The Eye Disease Case-Control Study Group examined the 253 subjects with idiopathic retinal detachments compared to 1138 controls, none of which were considered to have pathological myopia. From this analysis, the study group concluded that myopia was a significant factor in the development of retinal detachment. Specifically, a spherical equivalent refractive error between -1 and -3 diopters had a 4-fold increase in risk for RD, and eyes with myopia worse than -3 diopters had a 10-fold risk.6 Ogawa and Tanaka examined over 1100 cases of non-traumatic retina detachments and compared them to over 11,000 control cases. With increasing myopia, the Odds Ratio for retinal detachment increased from 3.1 for myopia less than –3.00D to 9.0 for myopia from –3.00 to -6.00D to 21.5 for myopia worse than –9.00D.7, 8 As such, optometrists can assume that there will be an increase in the number of retinal detachment cases observed in their practice as myopia become an increasingly prevalent condition.

Glaucoma
Multiple studies have examined the association between myopia and glaucoma development. A consistent finding is that being myopic increases your risk of developing open-angle glaucoma. The Beaver Dam Eye Study examined a predominantly Caucasian population and found that after controlling for age and gender, subjects with myopia were 60% more likely to have glaucoma than emmetropes.9 The Blue Mountains Eye Study found an increased prevalence of glaucoma for individuals between the ages of 60 to 80+ years old with myopia compared to individuals without myopia. The study also found that the Odds Ratio for glaucoma increased with the magnitude of myopia, suggesting a dose-response relationship between refractive error and the disease.10 Marcus et al. performed a meta-analysis of studies examining the relationship between myopia and open-angle glaucoma and concluded that having myopia approximately double the risk of developing open-angle glaucoma compared to patients who were not myopic. Given this association, optometrists should work to educate myopic patients on their glaucoma risk.

Cataracts have previously been linked to refractive error. The Blue Mountains Eye Study examined the relationship between refractive error and the 10-year incidence of cataracts. Compared to emmetropes, individuals with high myopia (worse than –6.00D) were at an elevated risk for nuclear cataracts. Individuals with low myopia (between –1.00D and –3.50D) and high myopia also had increased odds ratio for posterior subcapsular cataract. Myopic individuals had an increased incidence of cataract surgery, with increasing odds as the amount of myopia increased. Pan et al. performed a meta-analysis looking at age-related cataracts in myopic individuals and reported that myopia was associated with increasingly prevalent nuclear and posterior subcortical cataracts, but not incident cataract, suggesting that the relationship between myopia and cataract was in part due to refractive shifts caused by changes in lens density with cataract development. They concluded that there was insufficient evidence to state that myopia was an independent risk factor in the development of myopia. This is consistent with observations from the Beaver Dam Eye Study, where refractive error shifts in adults were found to be associated with age and degree of nuclear sclerosis, but independent of refractive status. 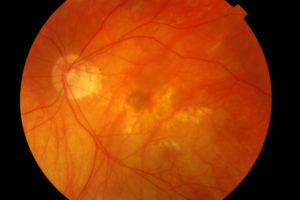 Perhaps the most devastating consequence of increasing myopia is the potential for myopia-related macular disease. Myopic maculopathy clinically is observed in highly myopic patients and often manifests between the ages of 40 and 60 years old.11 Retinal thinning can lead to choroidal neovascularization, and subsequent macular atrophy, resulting in significant visual impairment.12 Myopic choroidal neovascularization occurs in approximately 10% of high myopes.13 Clinicians should perform careful dilated fundus exams on highly myopic patients and looks for signs of excessive retinal thinning such as posterior staphyloma, areas of depigmentation around the optic nerve (myopic conus), lacquer cracks and chorioretinal atrophy.

Given the increasing numbers of myopes that are expected in the near future, optometrists should expect a proportional increase in ocular disease in our practices. It is the responsibility of every optometrist to educate parents, children and adult patients about the health risks associated with myopia and offer potential therapies which may reduce the risk of disease for future generations.