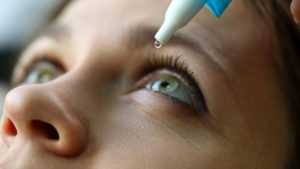 The most recently published meta-analysis included eight studies (Yang et al.). However, of these eight studies, two included only one-month results, and one included six-month results. Studies found that the combination therapy was more effective than OrthoK lenses alone only in the first few months, but there was no difference in the later stages of the combination. In addition, the study design of all these clinical trials was not randomized double-blinded, placebo-controlled studies, but rather they were randomized not-blinded, retrospective, or non-parallel studies.

The researchers included 53 children with myopia (spherical equivalent refraction, -1.00D to -4.00D in a prospective, randomized, double-blinded, placebo-controlled trial and randomly assigned them to treatment with a combination of OrthoK and 0.01% atropine (n=27; mean age, 10.07 years) or OrthoK and a placebo eye drop (n=26; mean age, 9.80 years). The children wore the lenses every night for eight hours and underwent axial length (AL), corneal power, and anterior chamber depth measurements at baseline and one-day, one-week, two-, four-, eight-, and 12-month follow-up visits. Treatment compliance was determined by the amount of eye drops that remained during follow-up visits.

Participants who used atropine 0.01% in conjunction with OrthoK experienced an axial elongation of 0.10 mm compared with 0.20 mm in participants treated with the placebo drop after 12 months. The change in AL between the two groups was only significantly different during the first four months.

Furthermore, the researchers wrote that studies including higher atropine concentrations, such as 0.05%, combined with OrthoK lenses and a treatment arm with only low-dose atropine should be conducted in the future.

Combination of Orthokeratology Lens with 0.01% Atropine in Slowing Axial Elongation in Children with Myopia: A Randomized Double-Blinded Clinical Trial

Background: To evaluate the additive effects of orthokeratology (OrthoK) lenses and 0.01% atropine on slowing axial elongation in myopic children.

Methods: A prospective, randomized, double-blinded, placebo-controlled trial was conducted over a 12-month period. Sixty children aged 8 to 12 years with spherical equivalent refraction from -1.00 to -4.00 D who had been wearing OrthoK lenses successfully for 2 months (as baseline) were randomly assigned in a 1:1 ratio to combination group (combination of OrthoK lens and 0.01% atropine eye drops) and control group (combination of OrthoK lens and placebo). The primary outcome was change in axial length, along with secondary outcomes including change in pupil diameter (PD) and accommodative amplitude (AMP) at 12 months (measured at 4-month intervals).

Conclusion: The combination therapy was more effective than the OrthoK lens alone in slowing axial elongation after 12 months of treatment, mainly in the first 4 months.