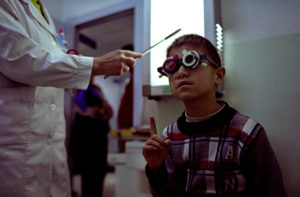 Myopia development occurs when axial length (AL) exceeds the focal length formed by the refractive elements of the eye. The relationship between refractive error (RE) and AL is stronger than any other component. By association, the correlation between change in AL and myopia progression is also high. There is also increasing interest in peripheral RE as a risk factor for myopia onset. Mutti et al. 2007 explore the process of becoming myopic in comparison to what is expected during normal development.

The aim of Mutti et al. 2007 was to examine the behavior of RE, AL, and relative peripheral RE before, during, and after myopia onset in children as compared to emmetropes. Participants included 979 children between 6-14 years old who participated in the Collaborative Longitudinal Evaluation of Ethnicity and Refractive Error (CLEERE) Study between 1995 and 2003. Of these children, 605 became myopic (at least -0.75D) and 374 were emmetropic (between -0.25D and +1.00D at all visits). Central RE and peripheral RE (post-mydriasis and cycloplegia) were measured using the Canon Autoref R-1 and Grand Seiko WR-5100K. AL was measured using the Zeiss Humphrey 820 A-Scan Biometer.

Data gathered showed that myopic eyes were different from emmetropic eyes before myopia onset with regards to RE, AL, relative peripheral RE, and growth rates. Compared to emmetropes, became-myopic children were less hyperopic, had a longer AL, and more peripheral hyperopia as long as 4, 3, and 2 years, respectively, before myopia onset. The fastest period for change in all components was in the year before myopia onset. RE and AL slowed in the year after onset, but both continued to grow and progress at an elevated rate compared to emmetropes. Relative peripheral RE displayed a similar pattern, but it stabilized across post-myopia onset visits rather than maintaining a moderate rate of change.

Across ethnicity, there were no differences in RE and AL for any year before myopia onset. At and after onset, Asian became-myopic children tended to have a more myopic RE, longer AL, and more relative peripheral RE as compared to Hispanic, African-American, and White became-myopic children.

This study’s strengths lie in the strict inclusion criteria, which allowed for clearer contrasts to be drawn between the emmetropic and became-myopic groups. Additionally, to improve generalizability respecting ethnicity, four clinic sites were added to recruit African American, Asian, and Hispanic children. However, the study was weakened as the prescription for what was considered myopia was somewhat suboptimal. It was likely too early or late for some children, considering that 11.5% received refractive correction 1 year prior to “myopia onset,” and 34.5% did not wear correction even 2 years later.

To conclude, Mutti et al. 2007 suggests that more negative RE, longer AL, and increased relative peripheral hyperopia occur 2-4 years before myopia onset. Unfortunately, this window of opportunity is brief. This presents a significant challenge for clinicians since the findings are better suited to pointing out potential predictive factors for future analyses rather than specific prognoses.

Purpose: To evaluate refractive error, axial length, and relative peripheral refractive error before, during the year of, and after the onset of myopia in children who became myopic compared with emmetropes.

Methods: Subjects were 605 children 6 to 14 years of age who became myopic (at least -0.75 D in each meridian) and 374 emmetropic (between -0.25 D and +1.00 D in each meridian at all visits) children participating between 1995 and 2003 in the Collaborative Longitudinal Evaluation of Ethnicity and Refractive Error (CLEERE) Study. Axial length was measured annually by A-scan ultrasonography. Relative peripheral refractive error (the difference between the spherical equivalent cycloplegic autorefraction 30° in the nasal visual field and in primary gaze) was measured using either of two autorefractors (R-1; Canon, Lake Success, NY [no longer manufactured] or WR 5100-K; Grand Seiko, Hiroshima, Japan). Refractive error was measured with the same autorefractor with the subjects under cycloplegia. Each variable in children who became myopic was compared to age-, gender-, and ethnicity-matched model estimates of emmetrope values for each annual visit from 5 years before through 5 years after the onset of myopia.

Conclusion: A more negative refractive error, longer axial length, and more hyperopic relative peripheral refractive error in addition to faster rates of change in these variables may be useful for predicting the onset of myopia, but only within a span of 2 to 4 years before onset. Becoming myopic does not appear to be characterized by a consistent rate of increase in refractive error and expansion of the globe. Acceleration in myopia progression, axial elongation, and peripheral hyperopia in the year prior to onset followed by relatively slower, more stable rates of change after onset suggests that more than one factor may influence ocular expansion during myopia onset and progression. 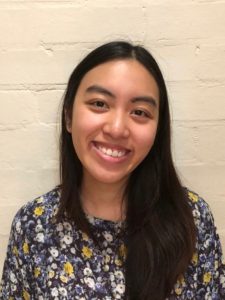 Erin Lam is an Australian optometrist who graduated from Deakin University with a Master of Optometry. She is currently a Project Optometrist with Brien Holden Foundation. Dr. Lam has a strong interest in myopia control and contact lenses.