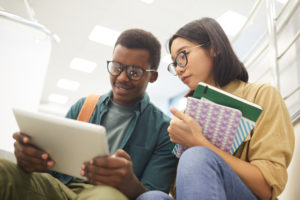 High myopia (HM), defined as spherical equivalent (SE) greater than or equal to -5.00D in young adults, is reaching epidemic proportions in East and Southeast Asia, with prevalence rates reported to range between 8% and 21.6% from childhood to young adulthood. Individuals with HM have an increased risk for visual impairment and blindness due to macular and retinal complications in later adulthood.

This study included 928 Singapore Cohort of Risk Factors for Myopia (SCORM) study children between the ages of 6 and 11 who were followed up for about seven years until they became teenagers (12 to 19 years old). Researchers performed cycloplegic autorefraction and AL measurements during the follow-up visits and evaluated SE and AL outcomes at three years. Myopia was defined as SE of -0.50D or greater, and high myopia was considered -5.00D or greater. The study’s outcomes of interest were teenage high myopia and AL of 25mm or greater, in addition to teenage SE and AL measurements at the final follow-up

The researchers concluded that three-year myopia progression in childhood combined with baseline SE and AL were good predictors of teenage HM. The study results may be helpful to risk-stratify and guide clinical decisions in terms of myopia control management for children. For children at higher risk, the researchers suggest more aggressive treatment may be necessary for myopia control.

Purpose: The purpose of this study was to evaluate the association of childhood progression of spherical equivalent (SE) with high myopia (HM) in teenagers in the Singapore Cohort of Risk factors for Myopia (SCORM).

Methods: We included 928 SCORM children followed over a mean follow-up of 6.9 ± 1.0 years from baseline (6-11 years old) until their teenage years (12-19 years old). Cycloplegic autorefraction and axial length (AL) measurements were performed yearly. The outcomes in teenagers were HM (SE ≤ -5 diopter [D]), AL ≥ 25 mm, SE and AL. Three-year SE and AL progression in childhood and baseline SE and AL with outcomes were evaluated using multivariable logistic or linear regression models, with predictive performance of risk factors assessed using the area under the curve (AUC).

Conclusions: Three-year myopia progression in childhood combined with baseline SE or AL were good predictors of teenage HM. Clinicians may use this combination of factors to guide the timing of interventions, potentially reducing the risk of HM later in life.