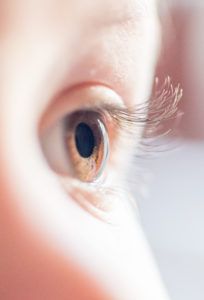 Less time spent outdoors is a primary risk factor for myopia development. It has been shown in a prospective study that children who had five hours or more of outdoor time per week remained non-myopic when compared with children who became myopic. The noticeable difference between indoor and outdoor environments is light intensity. And indeed, it has been shown that exposure to bright light as found outdoors can delay the onset of myopia and perhaps also reduce its progression due to increased dopamine levels in the retina.

Recently, scientific interest has shifted toward the effects of the spectral composition of light. Initial experiments in chickens had shown that blue light, moving the plane of focus more anteriorly and in front of the retina, inhibits eye growth. In contrast, red light, associated with a longer focal length, made eyes grow longer. Eye growth seemed to follow the focal plane position imposed by longitudinal chromatic aberrations (LCA). Results became more complicated when other animal models were studied. In particular, in tree shrews and monkeys, red light made the eyes shorter rather than longer.

To find out whether the retina can indeed compare focus at different wavelengths, Swiatczak and Schaeffel filtered conventional movies in real-time using custom-developed software. Each pixel in the movies was convolved with the point spread function calculated from purely spherical defocus originating from the human LCA function separately in the red, green, and blue image plane of RGB channels. The researchers hypothesized that red in better focus than blue would indicate to the retina that the eye is already too long and that eye growth will be inhibited. Conversely, if blue is presented in better focus than red, it was expected that eye growth would increase.

With the image focused more in red, significant axial eye shortening was observed in emmetropes over 45 minutes of exposure time compared to the control condition with unfiltered movies. Interestingly, no changes were observed in myopic eyes. Neither emmetropes nor myopes showed any changes in eye length when they watched the unfiltered control movies.

The researchers concluded that the results demonstrate for the first time that the human retina uses the difference in focus in blue and red to determine the sign of defocus for emmetropization. Strikingly, this function is lost in myopes. While the authors had previously found that the myopic human retina has limited ability to respond to imposed positive defocus, the current results show that the myopic retina has lost the ability to respond to longitudinal chromatic aberration.

In myopia, the eye grows too long, and the image projected on the retina is poorly focused when subjects look at a distance. While the retina normally controls eye growth by visual processing, it seems to give up during myopia development. But what has changed? To determine whether the sharp image is in front or behind the retinal plane, a comparison of image sharpness in red and blue would provide a reliable cue because focal planes are about 1.3 D apart due to longitudinal chromatic aberration (LCA). However, up to now, it could not be demonstrated that the retina does, in fact, hold up in such a comparison. We used a new approach: movies were digitally filtered in real time to present either the blue channel of the RGB color format unfiltered while green and red were blurred (“blue in focus”) or the red channel was unfiltered while green and blue were blurred (“red in focus”) accordingly to the human LCA function. Here we show that, even though filtered movies looked similar, eyes became significantly shorter when the movie was sharp in the red plane but became longer when it was presented sharp in the blue plane. Strikingly, the eyes of young subjects who were already myopic did not respond at all—showing that their retina could no longer decode the sign of defocus based on LCA. Our findings resolve a long-standing question as to how the human retina detects the sign of defocus. It also suggests a new non-invasive strategy to inhibit early myopia development: keeping the red image plane sharp and filtering the blue.