Upon completion of this program, the participant should be able to: 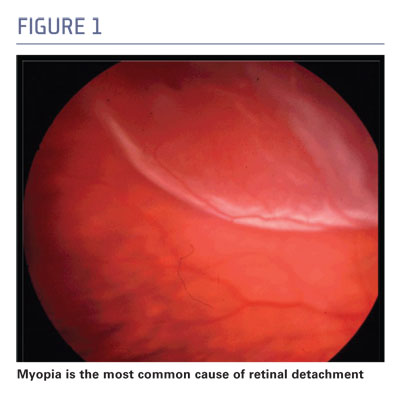 Myopia isn’t just a visual acuity problem. It has been connected to serious vision conditions such as premature cataract, glaucoma, retinal detachment and macular degeneration. The elongation and stretching of the eyeball in high myopia causes new blood vessels to form in the macula. This is called choroidal neovascularization and in turn, results in pigmentation and scarring. Recently, the FDA has approved Lucentis, a drug used to treat wet macular degeneration for the treatment of macular degeneration caused by high myopia.

High myopia is the most common cause of retinal detachment. Elongation of the eyeball leads to areas of stretching that can eventually tear. Here’s how it happens: The eyeball elongates, and the retina stretches and tears. Vitreous fluid seeps through the tear and causes the retina to detach from the choroid, the vascular layer of the eyeball between the retina and the sclera. 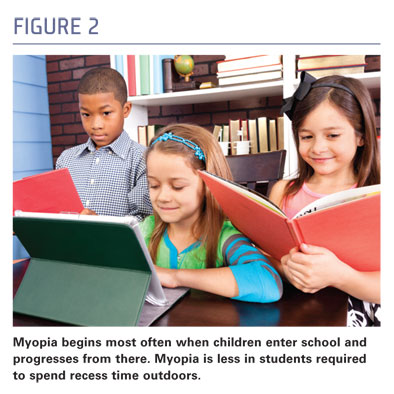 In myopia, we know that light focuses in front of the retina resulting in blur when viewing distant objects. This shortened focus is the result of an elongated eyeball, steeper than normal corneal curvature and a thickened crystalline lens—all conditions associated with myopia. There may not be a single cause, but a combination of factors (Fig. 2) including: environment, diet, accommodative lag, genetics, disease, visually guided eye growth, hyperopic peripheral defocus and decoupling of the rate of growth of the crystalline lens versus eyeball growth. We’ll take a closer look at each of these factors.

The environment in which we use our eyes can play a part in myopia development. The amount of near work we do, time spent on computers, video games and texting, as well as less time spent outdoors all affect our eyes. Research by the National Institute of Health found that children spend about seven hours per day on entertainment media including television, computers and video games. Considering time spent sleeping, eating and on other necessities, that’s quite a bit!

Lack of exposure to natural light may also play a part in myopia development. Exposure to sunlight may result in the production of dopamine, a chemical that is released by nerve cells to send signals to other nerve cells and also inhibits eye growth. In addition, Vitamin D, which we absorb from sunlight, may inhibit eye growth.

Visually guided eye growth is the process through which eye growth is naturally controlled to maintain normal vision. When light strikes the retina, amacrine cells—neurons that help regulate input from the photoreceptor cells—release chemicals that help slow scleral growth. In an experiment, chicks were raised in the dark and showed more eye growth than chicks raised normally.

Exercise, time away from near tasks and exposure to natural light may all be factors affecting myopia, based on results of a study from Taiwan.

For one academic year, a school required that all of its students spend their recess time outdoors. Significantly fewer students in that school developed myopia than students of a nearby school who were not required to spend recess outdoors. Based on those results, both schools now require recess outdoors!

We know that daylight hours vary by latitude. In higher latitude countries such as Denmark, daylight hours are short in winter, but very long in summer. This presented an opportunity to study eyeball growth, or axial growth, based on hours of sunlight by season. During the winter, axial growth was .07 mm more than during the summer.

Genetic factors contributing to myopia are being studied. In addition to other genes and chromosomes under consideration, the PAX6 gene may have a connection with the body’s production of a chemical that controls eye growth. Other evidence indicating a genetic factor is that Asians have the highest incidence of myopia—96 percent of Korean 19-year-olds are myopic—and African Americans the lowest. 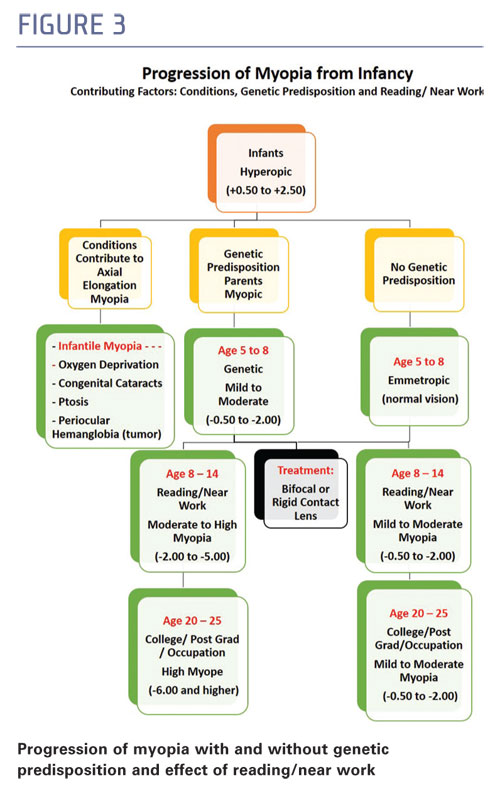 The chart in Fig. 3 demonstrates the difference in myopia progression with and without genetic predisposition—meaning one or both parents are myopic.

LEPREL 1 is another gene associated with myopia. LEPREL 1 encodes an enzyme that modifies collagen in the eye. A mutation in that gene results in the absence of the enzyme. An excess of collagen develops and the eye elongates. Collagen is a protein found in fibrous tissue like the sclera. When there’s too much collagen, the sclera grows and the eyeball elongates.

A small number of patients under age 20 are diagnosed with glaucoma each year. The elevated intraocular pressure associated with glaucoma causes the eyeball to stretch, resulting in myopia. With congenital glaucoma, when the IOP returns to normal, normal eyeball growth returns as well.

Glaucoma is also associated with Stickler Syndrome, a genetic condition. The syndrome is the result of the mutation of several collagen genes affecting collagen production, which in turn affects the eye shape, resulting in myopia.

Look at the illustration of peripheral hyperopic defocus (Fig. 4). Note that the central light rays are focused on the retina, where they should be, but the peripheral rays focus behind the retina.

Decoupling may be another factor in myopia. In children with normal vision, the crystalline lens thins and flattens with growth. In children who develop myopia, a study at the Ohio State College of Optometry found that the lens stopped changing about a year before myopia onset. Possible causes of decoupling are defocus, abnormal eyeball shape and ciliary muscle thickness.

NO CURE, BUT CONTROL

What can be done to control myopia? Rigid gas permeable lenses flatten the cornea, shortening axial length. But when the lenses are no longer worn, and the cornea resumes its original shape, myopia returns. A National Eye Institute Contact Lens and Myopia Progression study (or CLAMP) found that flattening the cornea doesn’t prevent the root cause of myopia, which is eyeball growth, and an Adolescent and Child Health Initiative to Encourage Vision Empowerment (or ACHIEVE) study found no difference in the progression of myopia between contact lens and spectacle wearers. Until recently, spectacles and contact lenses corrected only the central focus.

LASIK, or laser-assisted in situ keratomileusis, is a treatment for myopia, rather than a preventive measure. For that reason, it is done only on adults who have stable vision. It’s a procedure in which a surgical instrument used for cutting circular sections, called a trephine, cuts a flap in the epithelium to expose the stroma. The laser vaporizes the stroma to reshape it enough to correct the myopia. The flap is replaced, and the now flattened cornea heals naturally.

Photorefractive keratectomy, or PRK, also uses a laser to reshape the cornea, but no flap is cut. Like LASIK, PRK is a treatment rather than myopia prevention. In this procedure, an alcohol solution dissolves the epithelial layer. Next, the epithelial layer is removed. Then the Excimer laser sculpts the cornea. Finally, a bandage contact lens is worn until the cornea heals.

Intrastromal corneal rings can correct low to moderate myopia with less than a diopter of astigmatism. Inserting two crescent-shaped ring segments into the stroma on either side of the pupil flattens the cornea. If the rings are removed, the cornea will return to its presurgical shape.

For patients who have high myopia, corneal thinning or who otherwise may not be candidates for LASIK, an implantable contact lens may be the answer. A lens that looks similar to an IOL is implanted between the iris and the crystalline lens for vision correction.

Similar in design to multifocal contact lenses, the FDA has approved accommodating IOLs for myopia with presbyopia. The lenses have different zones for distance and multifocal powers. 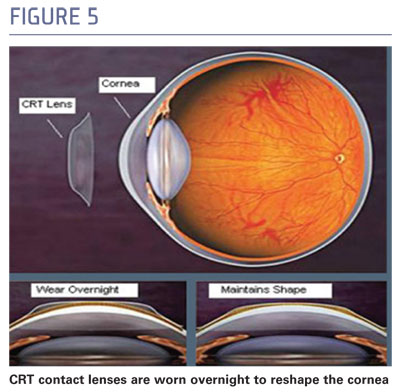 With Corneal Refractive Therapy, a specially designed contact lens is worn only overnight. The cornea flattens to shorten the axial length, and the new shape of the cornea also corrects peripheral focus, which may slow continued axial growth. 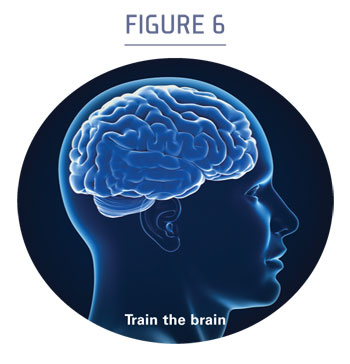 At least one study found that we can “train the brain” to be more sensitive to visual cues in patients with low myopia. Visual stimulation, improved contrast sensitivity and improved neurotransmission in the visual cortex improved visual acuity. This type of visual training uses Gabor patches to stimulate the receptors in the visual cortex. The patches are designed from mathematical formulas and cycle through lines of various darkness, intensity and frequency.

The process of “training the brain” relies on the concept of neuroplasticity. It is the ability of the brain to change to adapt to external stimuli. It is much the same principal as people who regain motor and speech function after brain trauma such as stroke. Some neuronal changes in the brain are necessary to compensate for damage. With myopia, the thinking is that if the visual cortex becomes more sensitive, vision improves. The question remains whether it will slow axial growth.

Drug therapies are under study for myopia control. Atropine, which dilates the pupil and inhibits accommodation, is one. Others are drugs that affect neurotransmission, collagen density and scleral viscoelasticity. Considerable caution is needed in approving drug therapies because they will be used in children.

We’ve looked at peripheral hyperopic defocus as a possible culprit in myopia progression. The Vision Cooperative Research Centre in Australia designed a way to independently focus central and peripheral images with a multifocal contact lens. This lotrafilcon lens has a peripheral add, and more contact lenses with designs of this type are becoming available.

Currently, such instruments are only in research facilities. The spectacle lenses are still under evaluation, but one study of children 6 to 12 in China and Australia with a family history of myopia who used the spectacles showed a 30 percent slowing in myopia progression. 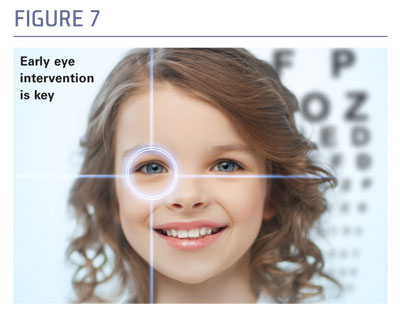 As with many other physical conditions, early intervention has been found to be key in slowing myopia progression. A study of children in Taiwan showed that 12 percent were myopic at age 6. That figure jumped to a whopping 84 percent by age 18! Myopia begins in children and progresses through adolescence. It is critical to identify candidates for myopia and put preventative measures and treatments in place early.

The Brien Holden Institute in Australia has done extensive research on the causes of myopia and its control. They developed a Myopia Calculator, in which you enter the patient’s age and refractive error, and it will predict the patient’s refractive error by age with and without management with multifocal contact lenses. This is a great tool to use in designing a treatment plan.

In summary, we’ve seen that the causes of myopia can be genetic, that is, a family history of myopia; environmental—related to diet, exercise and time spent outdoors, away from electronic devices; or developmental—factors that stimulate eyeball growth. There are many remedial and preventative treatments available and under study including diet, exercise, various therapies, contact lenses and surgery. Early action is key to slowing myopia progression.