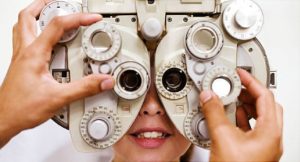 The three most commonly used cycloplegic agents include atropine, tropicamide, and cyclopentolate. The ideal cycloplegic agent is characterized by rapid onset, short duration of action, complete cycloplegia, and minimal side effects. Atropine is the gold standard for its cycloplegic effect, but the onset is very slow, and full recovery time is as long as 15 days. Therefore, it is not routinely used as a diagnostic agent in children or adults. Cyclopentolate is a synthetic antimuscarinic cycloplegic agent widely used as a cycloplegic agent in children and has been shown as effective as atropine at obtaining cycloplegia. For individuals with dark irises, cyclopentolate is characterized by an onset of quick action (30–45 min), a relatively short duration of action (24–48 h) with few side effects. Tropicamide, a synthetic analog of tropic acid, is another rapid-acting and safe agent for cycloplegic refraction. Compared with cyclopentolate, tropicamide is more acceptable in patients due to its fast onset (~30 min) and rapid recovery (6–7 h).

It has been reported that there is a delay in onset and a decrease in magnitude of cycloplegic effect with increased iris pigmentation in eyes caused by pigment binding of the cycloplegic agent. Therefore, researchers from China conducted a prospective randomized controlled study to evaluate the necessity of cycloplegia in Chinese young adults (aged 17–22 years) with dark irises and compare the cycloplegic effects of cyclopentolate and tropicamide. Although 0.5% tropicamide was utilized in this study, researchers confirmed that cyclopentolate had no statistically significant superiority in cycloplegia efficacy compared with tropicamide.

According to the International Myopia Institute Clinical Myopia Control Trials and Instrumentation Report, the recommended cycloplegia regimen that has been used in multiple clinical trials is two drops of 1% tropicamide separated by 5 minutes with primary outcome measures commencing 30 minutes after the first drop of tropicamide is instilled. Manny and colleagues have previously evaluated this protocol in an ethnically diverse cohort of U.S. children enrolled in the Correction of Myopia Evaluation Trial (COMET) and determined it to be an appropriate method for cycloplegia. Residual accommodation was found to be small (0.38 ± 0.41 D). Egashira et al. also compared the effects of cyclopentolate and tropicamide and found no meaningful difference in measured refractive error between agents 30 minutes after instillation. Given the unnecessarily longer-lasting cycloplegic and mydriatic effects of 1% cyclopentolate versus 1% tropicamide, as well as minimal additional gain in cycloplegia with cyclopentolate in myopic children, 1% tropicamide is recommended.

Background: To evaluate the necessity of cycloplegia for epidemiological studies of refraction in Chinese young adults (aged 17–22 years) with dark irises and compare the cycloplegic effects of 1% cyclopentolate and 0.5% tropicamide in them.