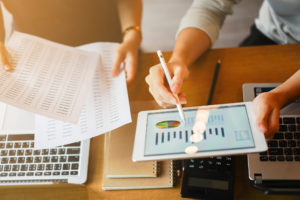 The prevalence of myopia is alarmingly rising, and estimates show that by the year 2050, half of the world’s population will be shortsighted. Numerous optical and therapeutic treatment regimens have been tested and shown to slow myopia progression with multifocal contact lenses being one such option. Accommodative behavior in myopic children with multifocal contact lenses has produced variable results and requires further research evidence.

The study by Cheng et al., 2019 evaluated the effect of multifocality on accommodation and convergence in a sample of 127 children (8 to 11 years of age). In this single-site, one-year, prospective, randomized, controlled, double-masked myopia control clinical trial, children were randomly assigned to wear a test (incorporated approximately +0.175 µm of SA) or control (conventional spherical) soft contact lenses bilaterally in a daily disposable modality. Accommodative response (WAM-5500), distance and near phorias (von Graefe method), and stimulus accommodative convergence/accommodation (AC/A) using gradient method were measured for all children at baseline, one-week and one-year follow-up visits. At baseline, tests were performed with refractive correction in the trial frame while subjects wore the study contact lenses at one-week and one-year follow-up visits.

Methods: A post-hoc analysis was conducted on data from a previously published myopia control trial. A total of 109 subjects (aged 8 to 11 years, myopia: -0.75D to -4.00 D) wore either a Control (single-vision, n = 57) or a Test (with positive spherical aberration, +SA, n = 52) soft contact lens, binocularly for one year. Accommodative response was measured as the subject observed targets at -1.00D to -4.00 D vergence using the Grand Seiko WAM-5500 open-field autorefractor (www.grandseiko.com/en/). Slope of accommodative response (SAR) as well as distance and near phoria and stimulus accommodative convergence/accommodation (AC/A) were compared between each group at baseline without study lenses and at one-week and one-year visits with study lenses. The SAR was also compared to changes in axial length (AL) and spherical equivalent cycloplegic auto refraction (SECAR).

Results: At baseline, there was no significant difference in SAR between the two study groups (ΔSAR = -0.039, p = 0.84). At one week, mean SAR of the Test group was significantly less than for the Control group (ΔSAR = -0.203, p < 0.0001), an effect that persisted to one year (ΔSAR = -0.129, p < 0.0001). In the Test group, greater SAR was associated with less change in AL (regression coefficient: -0.59 mm, p < 0.0001) and SECAR (regression coefficient: 1.12 D, p = 0.006) at one year. In the Control group, associations between SAR and change in AL and SECAR were not statistically significant. Compared to the Control group, eyes of the Test group appeared to be more exophoric with study lenses, however, the difference between the two groups was only significant at one week for distance phoria and one year for near phoria.

Conclusion: The soft contact lens with +SA for controlling myopia progression resulted in an apparent decrease in mean accommodation. Within the Test group, reduced accommodative response correlated with greater myopia progression, suggesting some subjects in the Test group utilised the +SA for near viewing, inducing hyperopic defocus at the retina. Accordingly, the potential impact of the opitcs of a lens on accommodative function should be considered during design of lenses to manage myopia.