There is ample cross-species evidence that ocular growth can be attenuated by defocusing light that falls on the retina.

That is the idea that the eye can detect whether light is focused in front or behind the retina then grow in the appropriate direction to reduce the blur. What that translates to in clinical application is if light focuses in front of the retina, such as myopic defocus, it is a strong stop signal for growth.

This knowledge inspired the concept of using bifocal or multifocal optics, where the center of the lens would correct for refractive error and the periphery of the lens would have relative plus power, to provide myopic defocus in order to neutralize the growth signal. 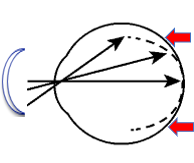 Early pioneers included Dr. Tom Aller in California, who used commercially available bifocal soft contact lenses for his clinical management of myopia. Also, Drs. John Phillips and Nicola Anstice from the University of Auckland used custom made bifocal contact lenses, which they named “dual-focus” contact lenses, and conducted a small scale RCT clinical study on the impact of the lens on myopia progression. These efforts have resulted in positive outcomes.

The Role of NaturalVue Multifocal Lenses
NaturalVue (etafilcon A) Enhanced Multifocal utilizes an aspheric optic optimized from a catenary curve. This optic resulted in a rapid and smooth power progression, causing minimal to undetectable visual disturbance, thus allowing an unprecedented amount of relative plus power in the contact lens periphery without sacrificing visual comfort. It is theorized that this high relative plus power provides a strong stop signal for eye growth and could attenuate myopia progression.

Bifocal contact lenses had positive clinical results on myopia progression control. Some cautioned the previous treatment effect found from relative plus power/myopic defocus via bifocal optics could be just association, not causation, to the myopia control results. Therefore, one should not assume other lens designs that provide relative plus power will be effective for myopia management.

As a result, a couple of randomized controlled studies were designed to evaluate two aspheric (catenary-like curve) relative plus power lens designs on eye growth using an animal model.

A Look Into the Data
In 2013, Drs. Woods, Irving, and their team from the University of Waterloo published a randomized controlled chicken study. These chickens (36) were wearing a lens goggle on their right eyes. Refraction and axial length measurements were taken at baseline and Day 14 by a masked examiner. The refraction was performed using streak retinoscopy. Axial length was calculated from cornea to retina using high frequency A-scan. After the study, frozen section measurements were also conducted for confirmation.

In their study design, there were two sets of control data:

There were two Myopia Progression Control (MPC) lens designs for the treatment groups:

Here are the results from the control groups: 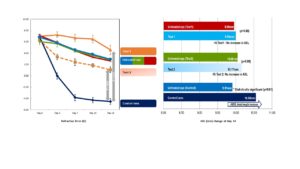 In 2017, Dr. Irving and team conducted another randomized controlled study. They evaluated the relative plus power impact on chickens which already developed myopia.

All 43 chickens wore goggles with -10D SV lenses on their right eyes for the first seven days, and these right eyes became myopic. Then these chickens were randomized into one control and two treatment groups on the seventh day (D7). Again, there were two sets of control data from contralateral untreated eyes and a -10D SV control group. Refraction (Rx) and Axial Length (AL) measurements were conducted during Day 0, Day 7, and Day 14 by a masked examiner. The treatment lenses were the same two designs (MPC 1 = NVMF and MPC 2 = 50% relative defocus of MPC1) as their previous study; however, they were labeled as Type 1 and 2 instead of Test 1 and 2 in this publication. 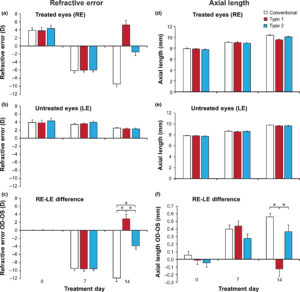 On Day 7, all treated eyes became myopic (-10D from baseline); contralateral untreated eyes stayed hyperopic. Chicks were randomly assigned into three groups, and there were no Rx or AL differences between groups at this point. Indicating these three groups had the same starting point.

On Day 14, the SV group’s myopia progressed significantly like the classic responses. Eyes that received 50% dose of defocus (MPC Type 2) became less myopic than seven days before (partial myopia reversal). Eyes with MPC Type 1 lenses, with full dosage of relative plus defocus, had reversed from being myopic and became hyperopic. In addition, they had become more hyperopic than the untreated control eyes at this point.

As we compare the data with contralateral untreated eyes, the differences are quite telling. At Day 14, MPC Type 2 (50% dose) showed reduction of myopia, but AL was shorter on average but not significantly different from the SV group. That means the axial length measurements from eye to eye varied a lot. MPC Type 1  eyes at Day 14 were more hyperopic than the untreated eyes. The AL comparison also showed the MPC Type 1 eyes were consistently shorter than the untreated eyes, and this was statistically significant. These results indicated there was a complete reversal of myopia for the group with MPC Type 1 lenses.

A similar study was conducted using dual-power lenses on chickens, and the results are similar to Irving’s MPC 2 treatment group. Liu and Wildsoet (2011) have reported partial myopia reversal and no significant difference in axial length from SV control group (Liu & Wildsoet 2011).