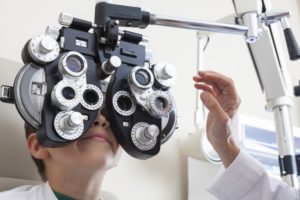 Retinal defocus is considered a causative factor for the pathogenesis of myopia. Progressive addition lenses (PALs) produce clear vision over a range of distances from near to far and, therefore, could reduce the defocus and slow the progression of myopia. This concept was studied in the Correction of Myopia Evaluation Trial (COMET), a National Eye Institute/National Institutes of Health–supported multicenter clinical trial that evaluated the efficacy of PALs in comparison to conventional correction with single vision lenses (SVLs) to slow the rate of progression of juvenile-onset myopia.

In this study, 469 myopic children aged 6 to 11 years with no underlying ocular pathologies were randomly fit with either SVLs or PALs (Varilux Comfort lenses with a +2.00D addition: Essilor of America). A +2.00D addition was chosen. Study optometrists were masked about the intervention strategy used or individual participants. Cycloplegic autorefraction was used to analyze the rate of progression of myopia in these children and was defined as the change in spherical equivalent refractive error (SER) relative to baseline (a continuous measure). The secondary outcome for COMET was change in axial length (AL) during follow-up relative to baseline measured by A-scan ultrasonography.

Adherence to glass wear: Overall, 93% of the PAL group and 96% of the SVL group reported wearing glasses all the time.

Synopsis
The treatment effect calculated with an adjusted mean difference in three-year SER between the PAL and the SVL group of 0.20D, although statistically significant, was not considered to be clinically relevant. The authors further discuss that retinal defocus resulting from insufficient accommodation when children engage in close work may be a stimulus for axial length elongation.

Purpose: The purpose of the Correction of Myopia Evaluation Trial (COMET) was to evaluate the effect of progressive addition lenses (PALs) compared with single vision lenses (SVLs) on the progression of juvenile-onset myopia.

Methods: COMET enrolled 469 children (ages 6–11 years) with myopia between -1.25 and -4.50D spherical equivalent. The children were recruited at four colleges of optometry in the United States and were ethnically diverse. They were randomly assigned to receive either PALs with a +2.00D addition (n = 235) or SVLs (n = 234), the conventional spectacle treatment for myopia, and were followed for 3 years. The primary outcome measure was progression of myopia, as determined by autorefraction after cycloplegia with 2 drops of 1% tropicamide at each annual visit. The secondary outcome measure was change in axial length of the eyes, as assessed by A-scan ultrasonography. Child-based analyses (i.e., the mean of the two eyes) were used. Results were adjusted for important covariates, by using multiple linear regression.

Conclusion: Use of PALs compared with SVLs slowed the progression of myopia in COMET children by a small, statistically significant amount only during the first year. The size of the treatment effect remained similar and significant for the next 2 years. The results provide some support for the COMET rationale — that is, a role for defocus in progression of myopia. The small magnitude of the effect does not warrant a change in clinical practice.