Spectacles have been the mainstay modality for myopia correction since their invention in the 13th century, and they remain far more commonly used today than contact lenses, especially in children. Spectacles that are proven effective for reducing myopia progression in a well-designed clinical trial would be a preferred modality for myopia management as they would require little change from patients, their parents, and prescribing ECPs. This is also true because, as a class, spectacles have a better safety profile than either contact lenses or pharmaceuticals.

Despite its obvious appeal, a spectacle-based myopia management solution has been elusive, with the robust, multi-site, myopia management clinical trials failing to demonstrate clinically meaningful efficacy.1,2 Previous approaches with spectacles can be grouped into two categories: (i) those with an accommodative and/or binocular vision effect, and (ii) those that reduce peripheral hyperopia. Regarding the first category of spectacles, Fulk et al. failed to show a clinically meaningful effect of bifocal spectacles, even when limiting the study to children with esophoria.3 The COMET study also failed to show a clinically meaningful benefit of progressive addition lenses.1 In fact, the only promising bifocal spectacle lens studied was an executive bifocal lens with prism.4 However, this was based on a single-site study with only Chinese children, and concerns about the cosmetic appeal of the product has limited its uptake in the market.

With regard to the second category, the first spectacle lens developed based on the peripheral defocus theory initially seemed promising for a subset of patients when studied at a single site in China.5 However, a more robust, multi-site study in Japan later showed no myopia controlling effect.2 It has been postulated that perhaps there was not enough plus optical power in the periphery of this spectacle lens to have a meaningful impact on myopia progression. A new peripheral defocus spectacle lens, with a higher amount of peripheral plus, showed promise in a Chinese population and is cosmetically acceptable,6 but it did not seem to be effective in children below age 10 and still needs to be validated in a multi-site study with a more diverse population.

Discovery of a New Myopia Etiology
Mutations responsible for a severe inherited form of myopia were mapped to a chromosomal region designated MYP1, the first high-grade myopia genetic locus.7 To everyone’s surprise, the mutations were in the genes encoding the cone photopigments, with either the red (L) or green (M) photopigment gene being responsible in a given patient. Subsequent experiments revealed that the mutation caused the cone photoreceptors that express it to be very insensitive to light.8 In the myopia patients, because cones expressing mutant photopigments always produce small signals relative to their neighbors that express normal pigment, the contrast between the normal cones and mutant cones is always high. We hypothesized that this abnormally high retinal contrast signaling leads to high myopia.

This alternative hypothesis, that high retinal contrast signals the eye to grow, predicted that reducing contrast will slow axial growth and prevent myopia progression. A pilot study to test this hypothesis was performed in children with rapidly progressing myopia. The children wore spectacles made to their prescription in which one lens was a standard of care corrective lens, while the contralateral lens incorporated optical elements that modestly reduced contrast. Remarkably, over the three-month trial period, axial growth was drastically reduced in the treated eyes compared to controls. When the lenses were then switched between eyes (i.e., contralateral crossover), the formerly treated eye resumed its growth, and former control eyes virtually stopped growing.

Mechanism of Action
Further genetic studies have reinforced the hypothesis that retinal contrast signaling abnormalities contribute to myopia. For example, mutations associated with Congenital Stationary Night Blindness, that increase stimulation of retinal contrast pathways, cause very high myopia similar to that produced by cone photopigment mutations.9 Conversely, mutations that lead to achromatopsia reduce stimulation of contrast pathways and are often associated with hyperopia.10

Intriguingly, these genetic observations fit together with clinical observations that (i) high-contrast visual activities, such as reading and near-work, are associated with myopia, and (ii) all optical interventions that have been shown to reduce myopia progression, such as orthokeratology and peripheral defocus contact lenses, create refractive blur that lowers contrast.

This contrast hypothesis may seem counterintuitive because, according to convention, the eye grows until images are focused, producing high contrast, which signals eye growth to stop. To resolve the apparent paradox, consider why the emmetropization process that accurately controlled refractive development in humans during the prehistoric years, fails when children spend much of their time indoors occupied with academics, televisions, tablets, computer screens, and smartphones. The eyes of prehistoric children were adapted to grow to the right length outdoors. During emmetropization, children are hyperopic, and distant objects in the peripheral vision of outdoor scenes would stay somewhat in focus even when the child was accommodating on closer objects. As the eyes grew toward emmetropia, distant outdoor objects that fill the peripheral vision of the accommodated eye were in focus progressively less of the time. However, when a modern child views a book or computer screen with accommodated eyes, her peripheral vision is filled with high contrast, well-focused images from the same focal plane rather than out-of-focus distant scenery. Well-focused, high contrast images in the peripheral retina when the eye is accommodated mimics the hallmark of hyperopia in a natural viewing environment and signals the eye to grow.

SightGlass Vision’s Novel Spectacle Lenses for Myopia Management
To further develop myopia management technology based on contrast-reducing lenses, SightGlass Vision was established in Palo Alto, California. We designed novel spectacle lenses that modulate peripheral contrast with no impact to on-axis vision,11 called SightGlass Vision DOT lenses. With this technology, contrast modulation is quantified and controlled. Also, the amount of contrast reduction is not vergence dependent (i.e., not affected by the fixation distance). The device has an excellent safety profile, is visually well-tolerated, and cosmetically acceptable. 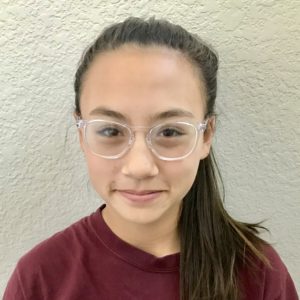 To demonstrate the safety and efficacy of SightGlass Vision’s DOT lenses, we designed a robust multicenter, subject-and observer-masked, randomized, controlled pivotal clinical study, CYPRESS (NCT03623074). This study enrolled, randomized, and dispensed lenses to 256 eligible children across 14 clinical trial sites in the U.S. and Canada. At the time of enrollment, subjects were six to 10 years old having myopia between -0.75D and -4.50D (SER) and were randomized into one of two test lens designs or a control lens in a 1:1:1 ratio. Children are being followed for 36 months, with interim analyses planned at 12 and 24 months. Myopia progression is being assessed through cycloplegic (open-field) autorefraction, and axial length is being measured using Haag-Streit Lenstar biometers. DNA was also collected to characterize cone photopigment genes as part of a program to identify myopia risk predictors.

The subjects are racially diverse and had an average integer age of 8.1 years (SD ± 1.2 years) at screening, making this one of the youngest cohorts ever studied in a myopia management trial. The average cycloplegic SER was ‑1.94D (SD ± 1.0D), and the average axial length was 24.02 mm (SD ± 0.77 mm) at baseline.

CYPRESS is an ongoing study, so we are careful not to release information that could potentially unmask the subjects. It is important to note that the optical profiles of control and experimental lens groups are identical, meaning peripheral defocus is not a factor in this study; it is purely evaluating the impact of reducing contrast on myopia progression.

Safety results from the 12-month planned interim analysis showed that for each group, all measures of visual acuity remained clinically stable through Month 12, and no serious adverse events were reported. In terms of efficacy, both test arms demonstrated superiority for cycloplegic SER change from baseline, with a reduction in myopia progression of 59 percent and 74 percent at 12‑months (P < 0.0001 for both test arms). For the same period, both test arms also demonstrated superiority in terms of axial length change from baseline, with a reduction in axial length progression of 33 percent (P = 0.0018) and 50 percent (P < 0.0001) at 12 months.

Spectacles Will Be a Critical Modality for Myopia Management
Myopia most typically develops in the school-age years12, and early age of myopia onset is known to be a powerful predictor of high myopia later in life,13–16, which increases the likelihood of a patient developing sight-threatening diseases such as glaucoma, myopic maculopathy, and retinal detachment.17 Starting treatment early, or even immediately, when myopia is still at a low level, is vital for limiting the overall severity and, thus, consequences.

From interviewing ECPs in clinical practice, we know that parents are often hesitant to put their young children into contact lenses or consider atropine for myopia protection. According to a 2010 survey, U.S. optometrists prescribe contact lenses as the primary form of vision correction to only 3 percent of children under 8 years of age, only 5 percent of those 8-9 years, and only 20 percent of children 10-12 years old.18 Therefore, given that most children are already wearing spectacles for their myopia correction, a spectacle option that has been proven to slow progression in a well-designed clinical trial will be embraced by parents and practitioners alike.

Based on genetic observations, SightGlass Vision has developed a new therapy for myopia management that utilizes a novel and unique mechanism of action based on contrast modulation. This new DOT lens therapy has shown very promising initial results in a large, ongoing, randomized controlled clinical trial. Having an efficacious, safe, and acceptable treatment for myopia, particularly for children younger than 8 or 9 years of age who are at the most risk for high myopia and sequelae, is critically important for the successful management of myopia.

Joe Rappon, OD, MS, FAAO, is the Chief Medical Officer of SightGlass Vision and has been involved with myopia research since 2009.

Jay Neitz, PhD, is a neuroscientist at the University of Washington where he is the Bishop endowed professor and the Research Director for the Department of Ophthalmology.