We know a lot about parental history and myopia, but what does the literature say about family history and age of onset?

The three siblings in the photo below, one of whom you may recognize, have something in common beyond our parents: we are all adult-onset myopes. We all developed myopia in our late 20s and experienced some modest progression, ending up between –1.00D and –2.00D. This came out of the blue, as our father was an emmetrope for most of his life, drifting into hyperopia in his 50s, while our mother is a strabismic amblyope with low hyperopia. Why us? We all attended college, but so did our father, and, like his oldest child, he has a PhD. 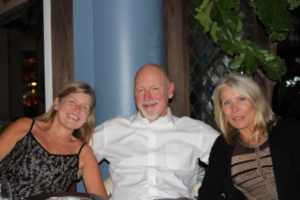 We know a lot about parental history and myopia, but what does the literature say about family history and age of onset? In an old and rarely cited publication, we observed that later-onset myopes tended to have more myopic siblings than their early-onset peers, but there was no difference in the parental history of myopia.1 Conversely, in a subsequent and more thorough evaluation of 396 adult myopes recruited for a five-year study, the number of myopic parents was significantly higher in early-onset myopes than in late-onset myopes, but the age of onset was not related to sibling myopia.2 So, after 30 years in the field, my contributions are modest and contradictory, but let’s take a look at a selection of other work on myopia onset and progression in young adults.

Adult-Onset Myopia
Dirani et al. reported the frequency of adult-onset myopia among Australian twins, 18 to 86 years of age.3 Of 1,170 twins, 347 (30%) were myopic, and 96 (28%) of these were adult-onset myopes. Several authors have reported the age of onset of myopia among students in professional programs. For example, Midelfart et al. examined 133 Norwegian medical students (aged 21 to 33 years) at the conclusion of their training4 and 50% were myopic. Among the myopes, 43% stated that they received their first prescription at 19 years or later. Loman et al. reported data on myopia onset in 177 third-year law students aged between 23 and 44 years,5 and 66% were myopic. Of the 110 myopes in whom the age of onset could be established, 70% developed myopia prior to college, 17% between entering college and entering law school, and 13% during law school. Finally, Onal et al. evaluated 270 Turkish medical students aged 18 to 26 years and found that 33% were myopic, adult-onset myopia comprising 15% of these myopic cases.6

There are also longitudinal data. Kinge and Midelfart conducted a three-year cohort study of 192 Norwegian engineering students (mean age = 20.6 years).7 Over the three years, 29 of the 49 emmetropes (59%) and four of the 51 hyperopes became myopic (8%). Jorge et al. conducted a similar study of 118 Portuguese university students (mean age of 20.6 years).8 Over the three years, five of the 34 emmetropes (15%) and one of the 58 hyperopes (2%) became myopic. Finally, Jacobsen et al. reported a two-year study of 143 Danish first year medical students with a mean age of 23.1 years.9 Of the 90 non-myopic students, myopia developed in 11 (12%).

Adult Myopia Progression
It is well established that the progression of early-onset myopia slows with age but in many cases continues into adulthood. The Correction of Myopia Evaluation Trial (COMET) Group estimated the age and the myopia level at stabilization in their cohort.10 Age at stabilization could be established in 426 participants. The mean age at myopia stabilization (defined as the age at which the estimated spherical refractive error was within 0.50D of the asymptote) was 15.6 years. Ethnicity, but not gender, was associated with age at stabilization, with African Americans the youngest to stabilize (mean = 13.8 years). Around half (48%) of the COMET cohort were stable by 15 years. The proportion of those who had stabilized increased to 77% by age 18 and 90% by age 21. These data, therefore, show that around a quarter of myopes are still progressing at 18 years and 10% at age 21 years. These statistics may underestimate as they only include myopia that developed at a relatively young age.

In the aforementioned three-year study, Kinge and Midelfart also reported progression among myopes.7 Mean progression was –0.66D, and 32% progressed by at least –1.00D. In contrast, Onal et al. evaluated 270 Turkish medical students aged 18 to 26 years, of whom 89 (33%) were myopic.6 No change in refractive error (mean: +0.02D) or axial length was observed after one year in the medical program. In a longitudinal study that began as a clinical trial of 240 children aged 8 to 12 years, Parssinen et al. reported 20-year follow-up data.11 Adult progression data were available for 147 of the original cohort. Mean myopic progression over eight years beyond ages 20 to 24 was      –0.45D.

What Should We Do?
To quote Forrest Gump: “It happens.” But what should clinicians do about progressing myopia in adults? First, we should assess corneal topography to rule out keratoconus and perform a careful slit lamp exam to ensure that the myopia is not cataract related. Axial length measurement may be helpful, but it may not help in the initial management without prior values. Substantial adult progression is rare, so focusing on those who appear to be rapidly progressing and those with already high levels of myopia would be prudent.

While there is compelling evidence for effective slowing of myopia progression in children using a range of approaches, no studies have evaluated myopia control in adults. Given that juvenile and adult progression are both due to axial elongation, it is reasonable to believe that established modalities would be effective in adults, but it is difficult to predict their efficacy.12

Thus, we must rely on our clinical judgment in the absence of an evidence-based approach. Progressive addition lenses (PALs) have limited efficacy in myopia control among children, so other myopia control options should be considered in adults, although they may make a patient with accommodative issues more comfortable. Ergonomic advice may also make the patient more comfortable and productive, but there is no evidence of it slowing myopia progression, even in children. Regarding outdoor activity, it may influence onset but probably not progression. Overnight orthokeratology, dual-focus contact lenses, and the new generation of spectacle lenses should all be discussed with a motivated patient. Adults will likely be more demanding than children, so visual quality with the various options should be part of the conversation.

This article is sponsored by Essilor.