As of March 31, governors in 30 states and the mayor of Washington, D.C., had issued stay-at-home orders. While many of these orders extend well into April or early May, Virginia’s order could extend potentially until June 10. Those actions seem to have added to the stress about financial and management implications for eye care professionals. Indeed, 77 percent of respondents in the most recent Jobson Optical Research survey said that they expect this COVID-19 experience to have a significant financial impact on their businesses. That percentage has increased with every new wave of the survey.

The fourth wave of the survey measures the attitudes and market trends from March 28-30. The results show practitioners working to maintain connections to their patient base. Many say they are connecting via telemedicine offerings, phone and social media outreach and working to provide products and services in some way. 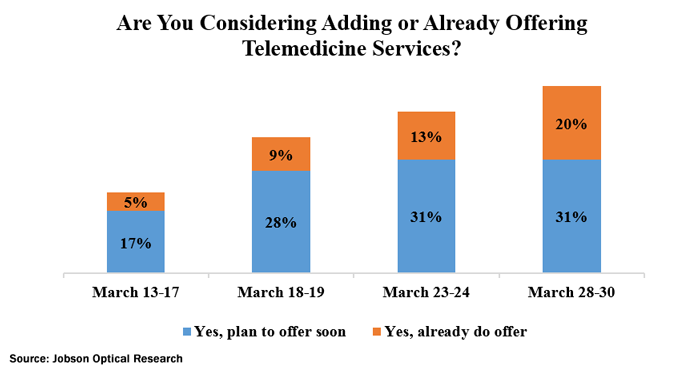 In addition, patients’ interest in accessing telemedicine services may be rising. Thirty-six percent of the respondents in the wave 4 survey said their patients are more interested, up from 30 percent in the third wave. In the second and first waves, it was 21 percent and 17 percent, respectively.

Those who are providing telemedicine services are using these technologies:

The percentage of practitioners who said they have billed for telemedicine services increased from 26 percent in the third wave to 44 percent in the second wave.

Uncertainty remains, as evidenced by respondents’ interests in guidance with staffing resources, negotiating payments and loans and unemployment resources. Between the third and fourth wave of the survey, interest surged in how to gear up for reopening and in understanding small business loans. Note that the CARES Act passed into law on Friday, March 27.

The full result of this survey, which includes data from earlier waves, is downloadable here.  https://www.reviewob.com/download-coronavirus-ecp-survey-wave-4/