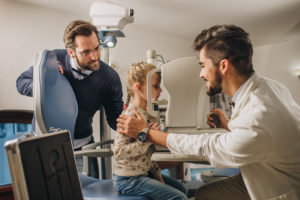 The authors reviewed the evidence and discussed the role played by the cornea during a) emmetropization and b) the development of myopia.

With respect to the role of the cornea during emmetropization, the authors summarized the evidence indicating that during the early years of life, when the eye is still developing and maturing, both the cornea and the crystalline lens flatten to decrease their refractive power and compensate for the rapidly increasing axial length. Later, during the school and middle years of life, corneal power remains relatively stable, but interestingly, in later years, corneal curvature was found to steepen, and it was suggested that this could be one of the compensatory mechanisms aimed at maintaining emmetropia given the decreasing axial length and crystalline lens power in the mature eye.

With respect to myopia development and progression, although axial length change is the key determinant for myopia progression, corneal power was also considered to play a role. Some evidence indicates that myopic eyes have steeper corneas, which is thought to be a result of a stretch factor (axial elongation with corneal steepening) rather than a size factor (where the axial length and corneal flattening are in harmony).

Furthermore, a high correlation between refractive error and AL/CR ratio indicates that not just the axial length in isolation but corneal power/curvature is a significant determinant of the eye’s refractive state. Interestingly, there is a low correlation between refractive and crystalline lens power. This suggests that corneal power, especially steeper corneas, plays a role. It hypothesized that mechanical force due to upper eyelid pressure could alter the corneal curvature and might play a role in corneal steepening observed in myopia.

In summary, it was hypothesized that greater corneal power and a higher AL/CR ratio play a role in the onset of myopia.

Role of the Cornea in Emmetropia and Myopia

The purpose of this paper is to review the available evidence concerning the role of the cornea in achieving and maintaining emmetropia, as well as its role in the development and progression of myopia. The role of the cornea in emmetropization is most evident at the two extremes of life. During infancy, when the axial length increases rapidly, both the cornea and the lens become flatter, moving the refractive state of the eye toward emmetropia; during the later years of life, when the axial length remains constant or even shortens, the cornea appears to steepen somewhat. When myopia develops, in some cases, the cornea may undergo a “paradoxical” steepening, which accelerates, rather than retards, the development of myopia. The effect of the cornea on the development and progression of myopia is evident when the ratio of axial length to corneal radius — the AL/CR ratio — is considered. Recent studies suggest that a high AL/CR ratio, which has a value of approximately 3.0 in the emmetropic eye, is a risk factor for youth-onset myopia. Several studies have shown that myopic eyes have greater mean corneal powers than emmetropic eyes; this may be mostly due to greater corneal powers being a risk factor for youth-onset myopia.