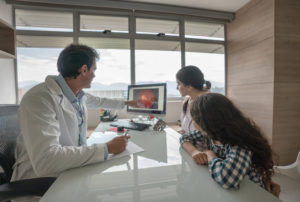 Orthokeratology (OrthoK) lenses are gaining popularity for use in children due to increased evidence of myopia control efficacy. However, questions have emerged around the validity of the measurement methods used for monitoring myopia progression with these lenses.

Axial length (AL) measurements are generally considered the gold standard for monitoring eye growth. AL is the distance from the anterior cornea to the retina and is the summation of the central corneal thickness (CCT), anterior chamber depth (ACD), crystalline lens thickness (LT), and vitreous chamber depth (VCD). Since the mode of action with OrthoK lenses is through the deliberate reduction of CCT to reduce refractive error, some have argued that this may lead to an overall underestimation of axial elongation and hence over-estimation of myopia control efficacy. Hence, the authors of this paper investigated the change in the individual components and overall change in anterior segment length (ASL = CCT + ACD + LT) and AL to determine the validity of using AL measurement for monitoring myopia control efficacy.

This randomized study compared 37 OrthoK lens wearers to 39 children wearing single-vision spectacles (control group). The children, aged 7-10 years, had low to moderate amounts of myopia, so they achieved good unaided vision after OrthoK treatment. Measurements of the CCT, ACD, and LT were taken at baseline and after six months of wear.

The study found that the treatment did not affect ACD, LT, and ASL, and although the OrthoK lenses did affect CCT, the amount of change was negligible compared with the overall change in AL. Hence, the researchers concluded that AL was a valid parameter for monitoring myopia progression with OrthoK lens wear. This study also validates the use of OrthoK lenses for myopia control efficacy.

Purpose: To investigate the short-term effect of orthokeratology (ortho-k) lens wear on the anterior segment length for validating the use of axial length for monitoring myopic progression after ortho-k treatment.

Methods: Thirty-seven and 39 subjects (ages: 7–10 years) were randomly assigned to wear ortho-k and single-vision spectacles, respectively. Central corneal thickness (CCT), anterior chamber depth (ACD), crystalline lens thickness (LT), and anterior segment length (ASL: summation of CCT, ACD, and LT) were measured before and 6 months after the treatment under cycloplegia. Changes in these parameters were evaluated and compared between the two groups of subjects.

Conclusions: Eyeball elongation occurred in children wearing both ortho-k and single-vision spectacles. Since ASL was not affected by ortho-k treatment, axial length measured reflects the true growth of the eyeball and is a valid parameter for monitoring myopic progression in ortho-k treated eyes. (ClinicalTrials.gov number, NCT00962208.)