With recent advances in technology, the use of AL as a metric to evaluate and monitor refractive error status is gaining significance as the measurement techniques are rapid, non-invasive, and do not require cycloplegia. 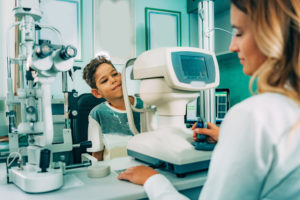 The axial length (AL) of the eye is the distance from the cornea to either the retinal pigment epithelium or the internal retinal membrane (depending on the technique used to measure AL). When AL exceeds the focal length of the eye’s optical components, namely the cornea and the crystalline lens, the eye becomes myopic.

Axial Length with Age and Gender
AL must be interpreted as a function of demographic factors such as age and gender. AL is known to increase in early childhood, followed by a slow growth until adulthood. AL from infancy to adulthood is reported to increase from 16.8 mm to 23.6 mm.3 Though a 1 mm elongation of AL is equivalent to a myopia shift of –2.00D to –2.50D in the absence of compensation, the increase in AL during childhood is offset by corresponding changes in lens and corneal power.4 Failure of these ocular compensatory mechanisms leads to myopia and high myopia and significantly increases the risk of vision loss.

A European population of children and adults showed that AL increased with age until 15, after which AL continued to increase into adulthood in the top 50th percentile.5 Two Chinese urban populations showed that average AL increased from 4 to 18 years, where the rate of increase was higher in the younger ages and gradually slowed with increasing age.6,7

Axial Length Differences Between Ethnic Populations
Ethnicity is an additional source of variation in AL. A comparison of AL between populations indicates that AL for Irish children aged 6, 9, and 15 years was similar to German children.5,9 Similarly, AL for Chinese children in Shanghai was similar to Chinese children in Wuhan.6,7 However, when compared between European and Chinese children, the AL of European children was shorter by 0.37 mm at 6 years, which increased to 0.87 at 9 years and 1.48 mm at 15 years. These differences are likely to be reflective of the higher prevalence of myopia, educational workload, and time outdoors. However, analysis indicates that age and refractive-error-specific AL were higher in Asian children than Caucasians.

Consider the example of using AL length percentiles for a Chinese female child 7 years of age. The measured AL of 22.40 mm, when compared to the reference percentile chart for Chinese females, indicates that the child was at the 35th percentile at 7 years, meaning that 35 out of 100 females aged 7 years have shorter eye length, and 65 out of 100 females aged 7 years have longer eye length. In this example, while the eye grew to 22.64 mm at 8 years, the percentile remained the same at the 35th percentile, indicating a steady growth pattern. However, at 9 years, the AL measurement of 23.15 mm reflects the 45th percentile, indicating the child’s AL had shifted by 10 percentile points. The 10-point increase may suggest an unusual growth in eye length between 8 and 9 years, with an upward shift in percentiles indicating a higher risk of myopia, thus requiring further investigation and treatment if needed.

Consider another example of a European male child aged 9 years with a measured AL of 23.5 mm. Their measured AL places them at the 65th percentile, indicating that the child’s eye length was higher than 65% of males aged 9 years. Considering the child’s AL percentiles, refractive error status, and other risk factors, anti-myopia treatment was commenced. The AL increased to 23.6 mm and 23.65 mm in the following years at 10 and 11 years. While AL increased, the percentiles reduced to the 60th percentile, indicating an improvement compared to the child’s baseline percentile and the reference population.