The development of effective and safe drugs for myopia control is not a distant future.

Both environmental and genetic factors control the development of myopia. Human population studies suggest that the leading environmental factors causing human myopia are near work and reading. The optical blur associated with near work is believed to be the signal that drives excessive eye growth and causes myopia.1,2 The association between optical defocus and myopia is supported by numerous animal studies. These studies have found that degradation of visual input using either diffusers or negative lenses causes excessive eye growth and myopia in species as diverse as fish, chickens, tree shrews, monkeys, guinea pigs, and mice.3

Although the increase in the prevalence of myopia in recent decades is primarily attributed to the rapidly increasing exposure of young children to near work, both environmental and genetic factors have been shown to contribute to myopia development.4 Moreover, a recent study has demonstrated the existence of genes that modulate the impact of myopiagenic environmental factors on refractive eye development.5 Further support for gene-environment interaction in myopia development comes from gene-expression-profiling studies, which have uncovered that the development of myopia is accompanied by large-scale changes in gene expression in the eye. This suggests that near work activates molecular signaling pathways in the eye that stimulate excessive eye growth, leading to myopia development.6 Several studies have revealed that the eye responds to local changes in optical defocus with local changes in growth rate. This suggests that information about optical defocus is summed up across the entire surface of the retina, which creates an integrated signal that regulates the growth of the eye.7,8 This demonstrates that the signaling cascade regulating refractive eye development is located within the eye itself and does not require feedback from the brain.

Currently approved treatment options for myopia are mostly limited to optical correction using spectacles or contact lenses. Optical correction using single-vision corrective lenses, which is the most widely used treatment option for myopia, does not stop the progression of myopia and does not prevent the blinding pathological complications associated with the disease.9,10 Several experimental optics-based clinical interventions that are meant to slow myopia progression, such as spectacles with bifocal lenses, multifocal contact lenses, and orthokeratology lenses have shown some promise. However, these treatment options have relatively low efficacy.11

Dioptragen’s Drug Pipeline
Dioptragen has identified over 130 drug compounds with anti-myopic potential (Figure 2). These drug compounds were divided into several priority categories based on their predicted potential to suppress myopia and known or predicted side effects. Atropine was picked up by the pharmacogenomics platform as one of the anti-myopic compounds and was placed in the top 20 group. Dioptragen is currently using animal models to conduct systematic pre-clinical studies of the candidate drugs identified by the pharmacogenomics platform. The company has completed initial pre-clinical studies of the top six drugs, which belong to six novel drug classes not previously implicated in myopia control. These studies have demonstrated their high efficacy and good safety profiles. While five of these drugs are still in pre-clinical stages of development, one of the drugs (LE420) is ready to advance to a phase II clinical trial. 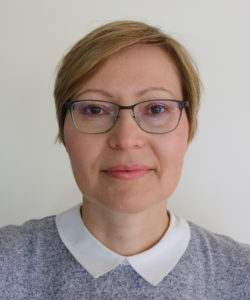 Tatiana V. Tkatchenko, MD, is a pediatric geneticist who has been working in myopia research for more than 15 years. She received an MD in pediatrics from the Russian National Research Medical University and has received training in pediatric genetics from the Université Montpellier II in France. She has also received training in molecular genetics at Harvard University. She has been working as an Associate Research Scientist at Columbia University in New York since 2014.