The use of the spectacle lenses for myopia management dates back more than 30 years ago, when bifocal spectacle lenses prescribed to children with near-esophoria showed a reduction in myopia progression.1, 2 Since then, several spectacle lens-based approaches have been assessed based on the two main theories of myopia development and progression: the Accommodative Lag and the Peripheral Hyperopic Defocus theory.

While the Accommodative Lag theory presumes that an insufficient amount of accommodation during near work – as reported in myopic children – causes retinal blur. The Peripheral Hyperopic Defocus theory is based on the findings that in myopic eyes, peripheral refraction profiles are relatively hyperopic; hence, it was hypothesised that both kinds of hyperopic blur signals could be a trigger for eye growth. 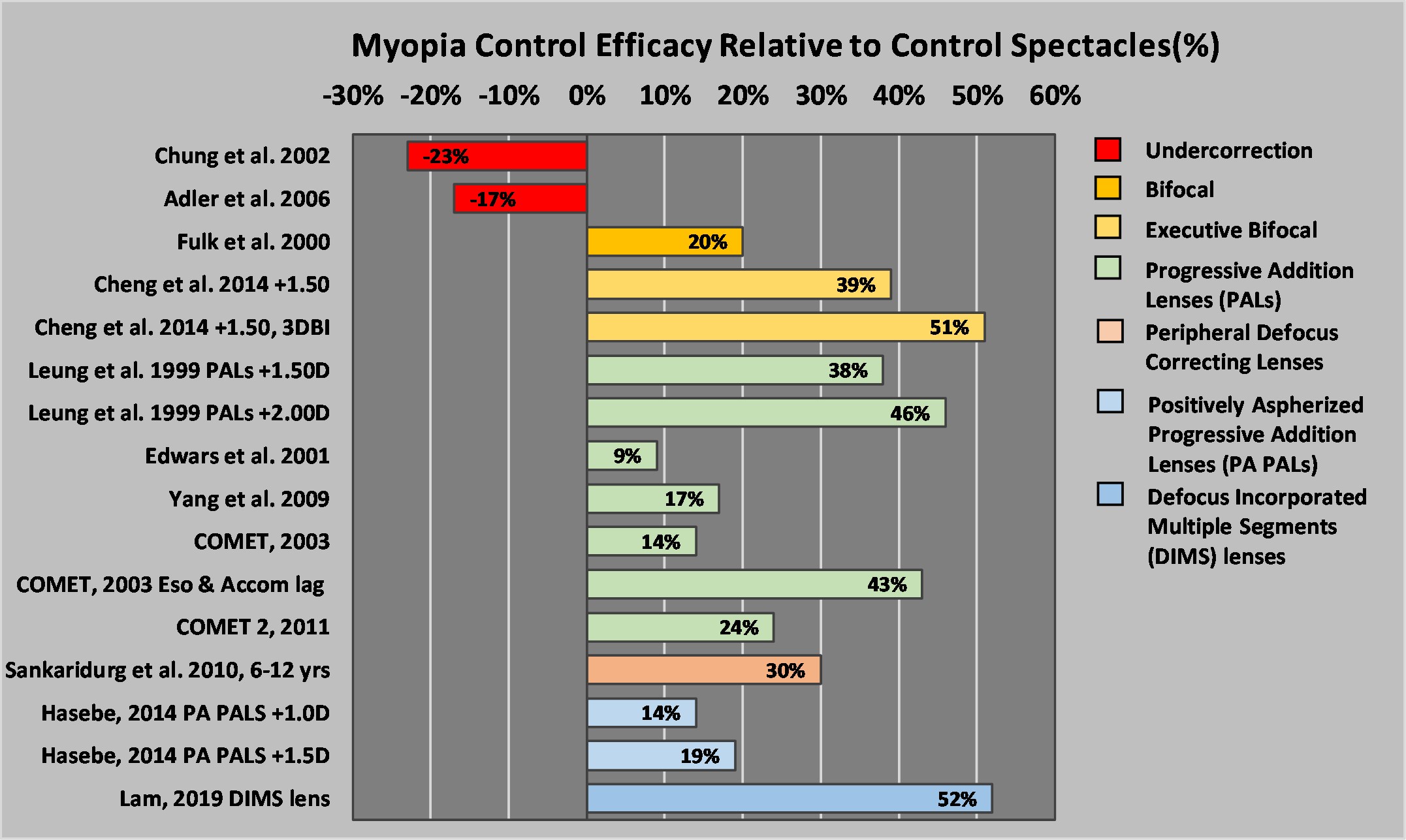 Although traditional bifocal lenses and PALs are the most commonly accessible and, hence, most studied spectacle lens-based interventions, such lenses have shown a relatively low efficacy in slowing myopia progression. Their treatment effect, however, improved in children with esophoria at near and/or when children had accommodative lags.11

Of the seven different spectacle lens-based, myopia-control modalities, the greatest efficacy was reported with the recent DIMS lens, with reduction in myopia progression and axial elongation of 52 percent and 62 percent, respectively.16 The DIMS lens features a clear central zone (9 mm diameter) surrounded by an array of multiple defocus segments (each 1.03 mm in diameter and a power of +3.50D), which are arranged in a hexagonal pattern covering a visual field of about 40 degrees. Unlike most of the other traditional spectacle lens-based approaches that provide extra plus during near work, the DIMS lens is entirely based on the hypothesis that imposing myopic defocus in the peripheral visual field, during distance and near viewing, can inhibit ocular growth. Due to its small central zone, this lens must be well fitted to provide good visual performance.

A similar myopia control efficacy of 51 percent was achieved with executive prismatic bifocal spectacle lenses (i.e. +1.50D add power and 3-Δ-near base-in prism) in children with high rates of myopia progression (i.e. ≥ 0.50 D in the preceding year) and lower lags of accommodation.14 The efficacy was reduced to 39.3 percent for the second test group, who wore executive bifocal spectacle lenses without the near prisms. However, the change in axial length was similar between both groups (i.e. Δ bifocals 34.1 percent versus bifocals 30.5 percent). Since this study tested executive bifocal lenses in already progressing children, care needs to be taken when comparing these results to other studies. In terms of lens design differences, it may be speculated that a better efficacy reported with executive bifocal lenses may be due to the significantly larger near portion, which during distance viewing would provide a greater amount of peripheral myopic defocus in the inferior visual field than with PALs or other traditional bifocal lenses, e.g. flat-top (D-segment).

Besides the spectacle lens strategies based on the Accommodative Lag and Peripheral Hyperopic Defocus theories, a relatively new strategy is based on incorporation of light-diffusion technology in spectacle lenses. While reports of early stage clinical trials are said to be promising (no published data yet), a large, multi-centre, randomised clinical trial is currently underway to assess this new technology in terms of safety and efficacy.17

Overall, spectacle lenses are a practical, generally well-accepted and safe method to correct refractive errors in children. For children whose onset is at an earlier age, where other modalities such as contact lenses are not really suitable (i.e. < 7-8 years of age), myopia control spectacle lenses should be considered as the first strategy. Younger children are prone to greater annual progression and are likely to achieve higher levels of myopia; therefore, to ensure maximum benefit, early intervention is critical. Further, to ensure that the best treatment effect and visual performance can be achieved, it is important that such spectacle lenses are well fit and regularly monitored. Depending on the risk factors and the rate of progression, additional intervention strategies, such as pharmaceutical (e.g. atropine) and/or environmental interventions (less near work, spending more time outdoors), may be considered in combination with myopia-control spectacle lenses. When appropriate, other optical interventions that have shown good efficacy in slowing myopia progression (e.g. multifocal or orthokeratology contact lenses) may also be considered.