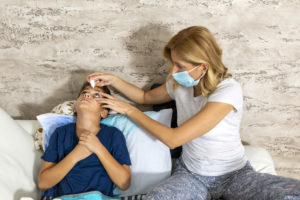 Myopia significantly impacts human health and the economy, with a greater burden resulting from higher levels of myopia. Currently, a variety of environmental, optical, and pharmaceutical interventions are being investigated for their role in slowing myopia progression. Of the various interventions tested so far, high-dose atropine appears to have the greatest efficacy in slowing axial elongation. However, its various and significant side effects such as photophobia, loss of accommodation, and rebound upon cessation are of concern in clinical practice. Furthermore, clinical trials with atropine were mostly conducted on Asian populations, raising the question of whether it is equally effective in non-Asian such as Caucasian populations.

In 2020, Polling and co-authors reported results from a three-year prospective clinic-based study in the Netherlands wherein 124 children, 5 to 16 years of age with either progression (spherical equivalent [SE]) of ≥ 1.00D/year, or SE ≤ -2.50D at 10 years and younger, or SE worse than -5.00D at 11 years old and above received 0.5% atropine. The primary outcomes were the annual progression of SE and axial length (AL). The annual reduction rate of SE was defined as the reduction in SE compared to that prior to treatment. After a minimum of one year of intervention, in children with a good/high response (SE < -0.50D/year and AL < 0.2 mm/year), atropine concentration was tapered to 0.25%, and then further to 0.1% and 0.01% every six months, while in children with an insufficient/low response (SE ≥ −1.00D/year, and AL  ≥ 0.3 mm/year), atropine concentration was raised to 1%.

Despite the study lacking a control group, the study confirms the efficacy of high-dose atropine in controlling myopia in a European population. The authors suggest photochromic progressive spectacles and a cap on outdoor activity to negate the severity of side effects. Also, tapering the dose appeared to be an efficient strategy to reduce the risk of the rebound response.

Background: Atropine is the most powerful treatment for progressive myopia in childhood. This study explores the three-year effectiveness of atropine in a clinical setting.

Methods: In this prospective clinical effectiveness study, children with progressive myopia ≥ 1D/year or myopia ≤ -2.5D were prescribed atropine 0.5%. Examination, including cycloplegic refraction and axial length (AL), was performed at baseline, and follow-up. Outcome measures were spherical equivalent (SER) and AL; annual progression of SER on treatment was compared with that prior to treatment. Adjustments to the dose were made after 1 year in case of low (AL ≥ 0.3 mm/year) or high response (AL < 0.1 mm/year) of AL.